Period drama with a dark side in this adaptation of Émile Zola’s 1867 novel ‘Thérèse Raquin’ from director Charlie Stratton and starring Elizabeth Olsen, Oscar Isaac, Jessica Lange and Tom Felton. At its heart we see a young woman coming to sexual maturity within a constrained environment, with Olsen adopted by Lange and forced to marry her son, Felton, who is often ill and not exactly a ‘sexual tyrannosaur’ (to ape Jesse Ventura’s line in ‘Predator’ 87) around the ladies. Near the beginning we see Olsen, secretly watching some yokel cutting crops in a field, furiously grinding her clit against the grass whilst she does so (we do not actually see the clit of course, I fear period drama audiences are probably not quite ready for that yet), which is great – female sexuality is still so often a marginalised and often scandalously taboo subject that it’s very refreshing to see it dealt with openly within this traditionally very conservative genre.

Moving to Paris the young couple are introduced to Oscar Isaac’s suave artist who will immediately, and rather easily it has to be said, charm the pants off of the main character, which leads to all manner of passionate and irrevocable decisions. A study in morality, sexuality and both basic human kindness and greed this is very well put together, shot and acted, in particular by Felton and multiple Oscar nominee Lange (6 times no less, with one win for lead actress in 94’s ‘Blue Sky’, and one supporting Oscar for 82’s ‘Tootsie’) and it ought to have wide ranging appeal, not simply to those with an affinity for costume pieces.

Interestingly, one scene features Olsen at her dressing table, Lange standing behind her chatting away, whilst Isaac is hidden under her skirts, conducting a conversation of his own, and the scenario together with the look on Olsen’s face, the powder on her cheeks and her contrasting striking red lipstick all create a remarkably familiar image – she would be the absolute perfect person to play Harley Quinn, aka Dr. Harleen Frances Quinzel lover of none other than Batman’s nemesis the Joker. Despite committing the potential sacrilege of putting Batman, Superman and Wonder Woman in the same movie together (not to mention allowing Zack Snyder and Ben Affleck loose on another superhero film) it’s unlikely that WB would go anywhere near the Joker for quite some time yet after Heath Ledger’s iconic Oscar winning portrayal, plus Olsen is set to appear in the Marvel Universe anyway, but you never know. 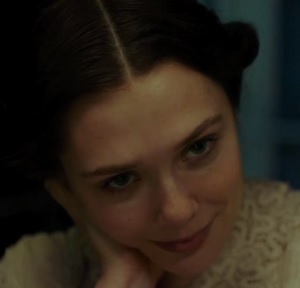